Haemochromatosis - When You Have Too Much Iron In Your Body 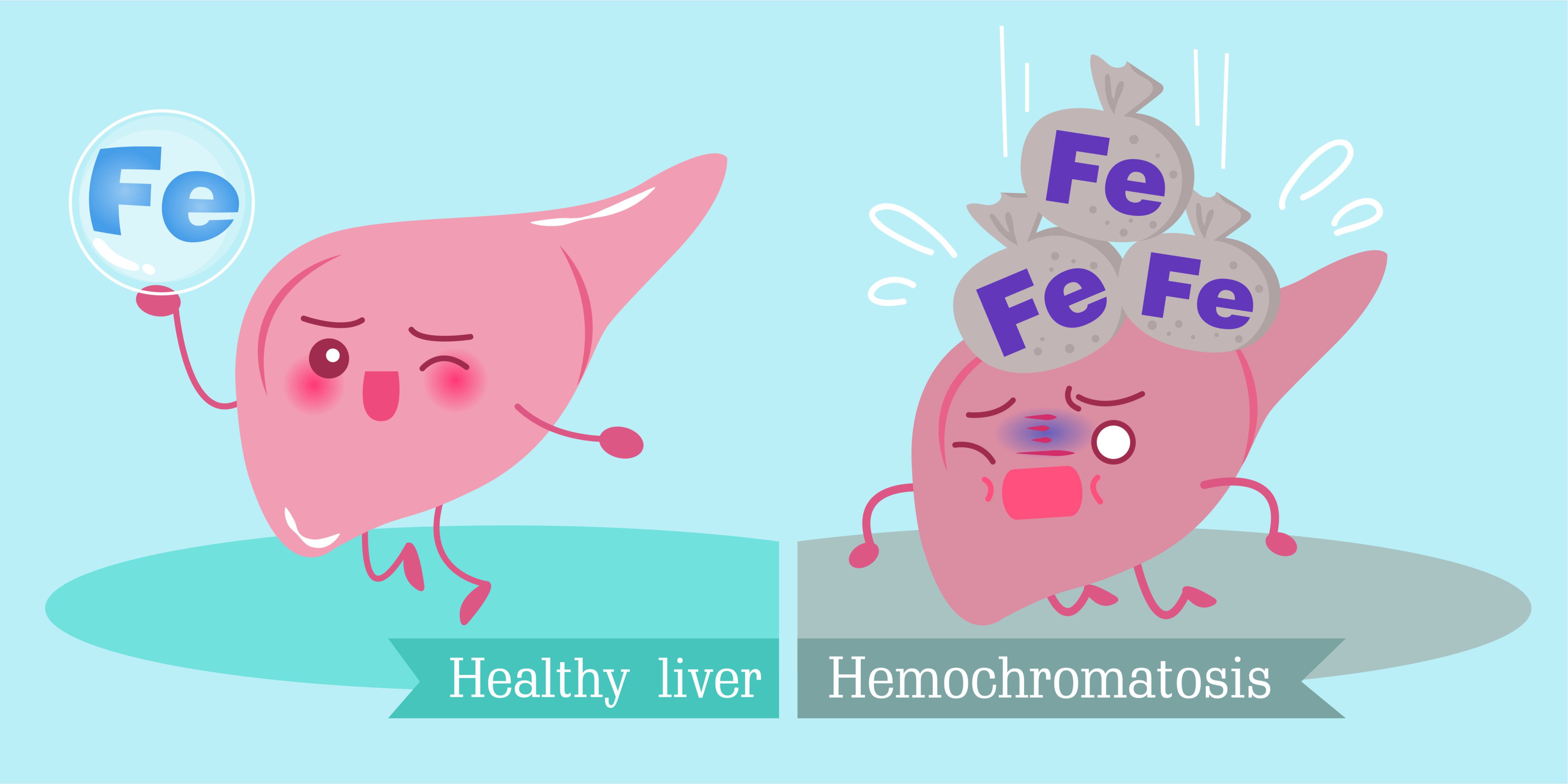 Haemochromatosis (Iron Overload Disorder) causes people to absorb excessive iron from their diet and is a relatively common genetic disorder in Australia. Around one in 200 people of northern European descent (Causasians) have genetic risk factors for haemochromatosis that may lead to the development of the disease.

In a normal person, the majority of the iron in the body is found in haemoglobin (a protein in red blood cells) with any extra being stored in the liver. This stored iron is used when iron in the body is depleted. The body has no mechanism for excreting excess iron, so the body controls iron levels by only absorbing the amount it needs from food.

The body typically has one gram or less of iron stored, but in a person with haemochromatosis, the body doesn’t stop absorbing iron at that limit and instead keeps building the stores of the trace mineral. Excess iron is stored in the joints and organs and as the body has no way to excrete the stored iron it continues to build up over time.

Organs such as the liver, heart, pancreas, brain & hormonal glands may be damaged by the excess stored iron, and iron in the joints may lead to arthritis and other joint problems. Both men and women, particularly between the ages of 30 and 60 are at risk of developing haemochromatosis. Women tend to develop the condition later in life than men as regular menstruation may help deplete excess iron.

Although it is common, Haemochromatosis is also under-diagnosed, in part because the symptoms of the condition are common to a number of other health issues.

No two people with haemochromatosis share the exact same symptoms and for some the condition may be asymptomatic. Symptoms, if there are any, develop slowly over time as iron builds up in the organs or joints and may not be noticed until the symptoms become severe.

This slow development of symptoms combined with the fact that many of them are shared by numerous other conditions or the effects of aging may make haemochromatosis difficult to diagnose.

If your doctor suspects haemochromatosis they may schedule a number of tests to determine the amount of iron in your blood. If the blood test returns abnormal results, further testing, such as genetic testing, an MRI scan to detect the amount of iron in the liver, or a liver biopsy may be needed to complete a diagnosis.

Common symptoms of haemochromatosis include:

If you have a family history of haemochromatosis, or have been experiencing a wide range of symptoms, schedule an appointment with a doctor to see if you have an abnormal HFE gene.

Haemochromatosis is a genetic disorder and, as such, anyone carrying the abnormal genes may develop the condition. Genetic screening may be used to identify if someone has the gene responsible for haemochromatosis.

HFE, the gene responsible for hereditary haemochromatosis is autosomal recessive. This means that for the gene to be passed on both the mother and father must have the abnormal HFE genes. Approximately one in seven people have a HFE mutations making them potential carriers capable of passing on the gene to children. Carriers will not develop haemochromatosis themselves, only carry a gene that may be passed on.

In addition to having the gene, there appear to be a number of factors that may increase the chance of developing haemochromatosis, including:

Blood loss through injury or donation, blood transfusions, and various forms of anaemia may also affect the chance of someone developing haemochromatosis.

Treatment for and Living With Haemochromatosis

As the condition affects the way in which the body absorbs iron, treatment and management of the condition revolves around both removing excess iron from the body as well as limiting iron intake.

One of the key treatments for haemochromatosis is known as venesection or phlebotomy. During venesection, blood is removed (in a manner similar to blood donation) helping to reduce iron levels. When new blood is being produced, iron is needed to build haemoglobin and the body draws from the stored deposits in the liver and other areas.

Depending on the severity of the case and how early it has been detected, early stages of venesection may require the person with haemochromatosis to have around 500ml of blood taken on a weekly or even twice weekly basis for an extended period of time (around 18 months). Once the levels of iron are in an acceptable range, the frequency of venesection may be reduced to monthly, quarterly or less.

Venesection may be performed in a number of different practices, such as your GP or most hospitals. The Australian Red Cross Lifeblood also offers therapeutic venesection services..

Dietary and lifestyle changes are also necessary to ensure that iron intake is limited. Such changes may include:

Dietary changes should be discussed with a doctor before they are adopted.

The easiest and most convenient way to make medical appointments is to search and book online with MyHealth1st.

Everything You Need to Know About Gastritis

Gastritis is an inflammation, irritation or erosion of the lining of the stomach that can be caused by a number of factors. Rather than being a singular disease, gastritis is a condition that can have a number of causes. No matter the cause, one of the most common characteristics of gastritis is pain or discomfort in the upper portion of the abdomen. This is sometimes referred to as dyspepsia.

Everything You Need To Know About Hepatitis

Hepatitis is an inflammatory condition of the liver that impairs liver function. The inflammation is typically caused by a viral infection, but can also be caused by autoimmune disease, alcohol consumption, drug use or exposure to toxins.

Prediabetes describes the condition of a person having blood sugar levels that are higher than normal but not high enough for a diagnosis of type 2 diabetes. Rather than being a disease or condition in itself, prediabetes is a risk factor that greatly increases a person’s chance of developing type 2 diabetes as well as cardiovascular conditions including heart disease and stroke.